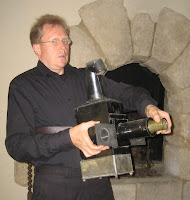 To continue to find alternative definitions for media archaeology, here is another one - a more straightforward than my previous one, the so-called beta 0.8 definition.

This next one, below, comes from Erkki Huhtamo, and is taken from the The Routledge Companion to Film History, edited by William Guynn (2010, page 203):

"The term 'media archaeology' has come to refer to a particular way of studying media as a historically attuned enterprise. Media archaeologists claim they are 'excavating' forgotten media-cultural phenomena that have been left outside the canonized narratives about media culture and history. Histories of suppressed, neglected, and forgotten media have begun to appear, ones that do not point selectively and teleologically to the present cultural situation and currently dominant media as their 'perfection', as traditional histories (including cinema history) often do. They have challenged the 'rejection of history' by modern media culture and theory alike by pointing out hitherto unnoticed continuities and ruptures. As a consequence, the area considered relevant for media studies has begun to expand both temporally and spatially. The field of research has been extended back by centuries and is also expanding beyond Western media cultures. Some prominent scholars linked to media archaeological approaches (although all of them don't necessarily define themselves as media archaeologists) are Friedrich Kittler, Siegfried Zielinski, Erkki Huhtamo, Jussi Parikka, and Wolfgang Ernst."
Posted by Jussi Parikka at 01:42