Imaginary media -- on chapter 2 of the book

I am at the moment writing chapter 2 for the new Media Archaeology book (the first one, already finished, that we co-edited with Erkki Huhtamo and that features a range of excitign articles from such top writers as Thomas Elsaesser, Wendy Chun, Wolfgang Ernst, Machiko Kusahara, Claus Pias, Jeffrey Sconce, lots of others, and afterword from Vivian Sobchak is now promised to be out in Spring 2011 -- see the University of California Press page for the book.)

Chapter 2 focuses on "imaginary media research" and its idea can be summed up here as follows:

Imaginary media research (so well summed up by Eric Kluitenberg's edited book Book of Imaginary Media in 2006) has to a large extent focused on a) media imagined, non-existent, but worthy of exploration in terms of how it can reinvigorate current media cultural design and debates or b) the dreamworlds surrounding media and tech, the way they get invested with weird desires, social constructions, articulations with human worlds of politics and meanings (Zoe Beloff's media archaeological art being one of the best examples of such) but also, and this is the insight I aim to bring in: it is c) a shorthand for what could be addressed as the non-human side of technical media; the fact that technical media non-solid (or summons non-solid worlds), non-phenomenological (electromagnetic fields, high level mathematics, speeds beyond human comprehension, etc) and because of that ephemeral nature it is often described with language of the fabulous, spectacular. Hence, imaginary media is tightly interlinked with non-human technical media especially since early 19th-century, and 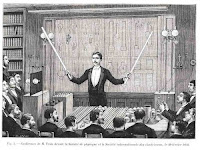 this materialist notion of imaginary media also detaches from e.g. Zielinski's more poetic vision. It does not mean a valorization in one direction or the other, but points towards how imaginary media research can extend to new directions, to thinking "imaginary" as less Lacanian (providing dreamworlds of unified bodies, as in reference to Lacan's tripartite functioning of the psyche as Real, Imaginary, and Symbolic) but as an affordance for the new --- to think media anew, and in weird places, in weird bodies.

Was my Insect Media already a work of imaginary media in this sense?
Posted by Jussi Parikka at 02:47