Voice analysis and visualisation circa 1900

At times haunted by a spirit of curiosity ("just because it is interesting"), media archaeological work has not always succeeded in justifying its relevance to wider questions concerning the "why" question of historical inquiry. Yet, I myself will post something...interesting -- just for the sake of curiosity. 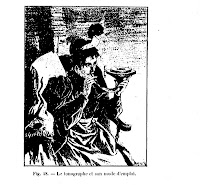 Found today, "the tonograph", a small, mobile instrument for analysis and visualisation of sound. The horn-like instrument both produces the sound and also "paints" the voice on the membrane at the end of the horn, which then can be photographed. As is described in La Science curieuse et amusante (by Faideau, published in Paris, 1902 - also the source of the images, pp. 79 and 80), not only the voice but the inscription is beautiful... naturally, there was much analysis and graphical representation of such phenomena as sounds as well as movements during that time and much earlier, but still, an interesting mobile object that links to later avant-garde fascination with sounds that can be seen. 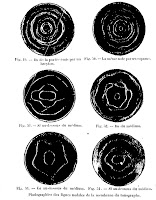