The analysis, transmission, storage and modulation of light forms a firm basis for much of modern technical media. Hence, light itself - and the lighting up of public space - is an essential part of our media archaeological excavations. 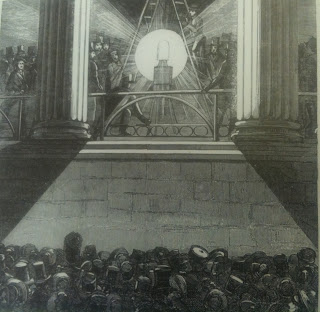 This example from the London Illustrated News, 9 December 1848, "The Electric Light". Demonstrating the spectacle of light and streets illuminated at the Trafalgar Square the paper describes:

“ The light produced was of a most powerful character, but is, in our opinion, still but a costly experimental toy, whose practicability forms a whole subject for conjecture.”

Later broadcasting picks up from such dress rehearsals - the ray of light eminating from a centralized position, with the large following gazing their eyes on that spectacular attraction - which is itself, primarily, a social relationship - as Debord much later writes of the spectacle.
Posted by Jussi Parikka at 15:01