I visited the Computerspielmuseum in Berlin Friedrichshain on Sunday for the first time. On the Karl Marx allee, in the midst of the majestic 1950s houses, it was a nice way to spend over an hour. Besides the usual stuff of hardware and games (some of them you could play as well) of recent decades, a couple of media archaeologically interesting examples:

Winky Dink - a video of the mid 1950s kids' TV show, which included a special drawing screen that was attached on the television screen -- and the show's host was offering guidance on drawing on that, offering both an early interactive TV experience as well as a certain kind of tactility with the early medium (I am not sure but I think Huhtamo has somewhere referred to this tactility). 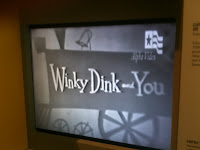 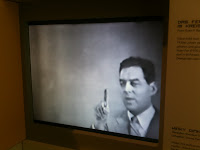 Another interesting example from their collections was the GDR educational computer, Piko Dat, from 1969. It was to teach the basics of programming (by creating circuits), and hence also programming games even - and can be seen emblematic of the wider role cybernetics was envisioned to play for the socialist reality. 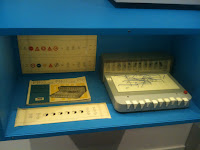 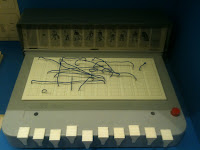 The museum was aiming to be both entertaining as well as informative, even slightly self-reflective of the difficulties in preserving the cultural heritage of software based forms such as gaming - with even some sections dedicated to this question! In addition, some interesting corners concerning the global situation of game design, and some experimental projects made the museum a bit more interesting than "your usual" game museum, I would say.
Posted by Jussi Parikka at 14:20