We are working on a joint text with Dr Garnet Hertz, an artist and a writer, on media archaeology and its connection to DIY art methodologies. This text is to continue our recent discussion on media archaeology published in Ctheory, and continues to elaborate some of the new directions in which media archaeology is inspiring art and theory. Below the beginning of the text that is still work-in-progress, but informs both Garnet's own project on theory of DIY as well as my own media archaeology book.

A more frightening prospect than a past that never can be regained is a past that never goes away. We know this lesson from horror films with the undead, zombies, and other things supernatural that haunt us, but we recognize it from everyday life as well. We recognize it from the heaps of waste and refuse that pile up in our basements, outside urban centers, and in places which are characterized by obsolescence, discarded objects, and things we hope stay forgotten. Of course, this is not the case with the return of dangerous toxins and other residue from supposedly immaterial information technologies – hundreds of millions of electronic devices discarded annually, most of which are still working. Obsolescence returns. In the United States, about 400 million units of consumer electronics are discarded every year. Electronic waste, like obsolete cellular telephones, computers, monitors, and televisions, compose the fastest growing and most toxic portion of waste in American society. As a result of rapid technological change, low initial cost and planned obsolescence, the federal Environmental Protection Agency (EPA) estimates that two-thirds of all discarded consumer electronics still work – approximately 250 million functioning computers, televisions, VCRs and cell phones are discarded each year in the (United States.Environmental Protection Agency. Fact Sheet: Management of Electronic Waste in the United States, July 2008, EPA 530-F-08-014. )

The promised discursive disembodiment is embedded in a large pile of network wires, lines, routers, switches, and other very material things that as Jonathan Sterne acutely and bluntly states, "will be trashed". (Jonathan Sterne, "Out with the Trash: On the Future of New Media." In: Residual Media, edited by Charles R. Acland. (Minneapolis: University of Minnesota Press, 2007), 17.) Far from being accidental, discarding and obsolescence are in fact internal to contemporary media technologies. As Sterne argues, the logic of new media does not only mean the replacement of old media by new media, but that digital culture itself is itself loaded with the assumption and expectation of a short-term forthcoming obsolescence. There is always a better camera, laptop, mobile phone on the horizon: new media always becomes old. The lifecycle of a standardized consumer object is also its Heideggerian style deathcycle – a planned part of the cycle of media-cultural objects.

This text is an investigation into planned obsolescence, media culture and the various temporalities of media objects; we approach this under the umbrella of media archaeology and aim to extend the media archaeological interest of knowledge into an art methodology. Hence, media archaeology becomes not only a method for excavation of the repressed, the forgotten, the past, but extends itself into an artistic method close to Do-It-Yourself (DIY) culture, circuit bending, hardware hacking, and other exercises that are closely related to the political economy of information technology, as well as the environment. Media embodies memory, but not only human memory; memory of things, of objects, of chemicals, and circuits that are returned to nature, so to speak, after their cycle. But these can be resurrected. This embodiment of memory in things is what relates media archaeology to an ecosophic enterprise as well. 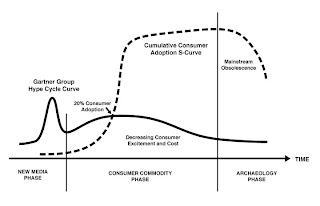 Phases of media positioned in reference to political economy: New Media and Media Archaeology are overlaid on Gartner Group's Hype Cycle and Adoption Curve diagrams, graphic representations of the economic maturity, adoption and business application of specific technologies.While the diagram itself is a reappropriated remix, the media archaeological phase as well is characterized by methodologies of remix and reuse, which play an ecosophical function as well.