Thanks to all who came to our transmediale'13 launch of What is Media Archaeology? and Wolfgang Ernst's Digital Memory and the Archive. We had a blast, and were able to both introduce the books and also carve out some productive differences in our approaches. Ernst brought with him the beautiful magnetic core memory that also is featured on the cover of his book. Part of the Media Archaeological Fundus' collections. For me it was great to be launching this in the midst of yet another great bunch of tm exhibitions of media archaeological resonance: the Octo Pneumatic Media System (a Rohrpost in action), the Evil Media Distribution Centre, Refunct Media vol. 5, and more. 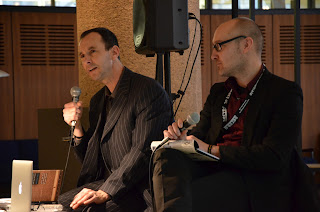