The Underbelly of the Underground

So much had to be in place and happen before Colonel Yolland acting on behalf of the Government stepped in and down. He was there to inspect the Underground, soon planned to be running with tightly set schedules. Every ten minutes from eight in the morning to eight in the evening, from Paddington and Farringdon stations. Before that, from six onwards, and after eight until twelve, every 20 minutes. Not bad service for 1863. And even the third class customers had light -- gas light, of course.

In order to celebrate the 150 years of London tube service, and before the Colonel himself made those last rounds - he was after all the man you had to call when an accident happened, he was after all  Britain’s Chief Inspector of Railways and fierce proponent of railway safety measures - so much hard work had happened that was not just an expression of Victorian spirit for grand architectural projects. Indeed, on the microlevel, imagine the work and consideration that had to be in place. For years, planning and building, engineering the project; considerations of ventilation and sewage had to the priority. Discussions about the soil and shafts, a true mining project that provided the underground transport media it's viability that 150 years later seems more idealistic. 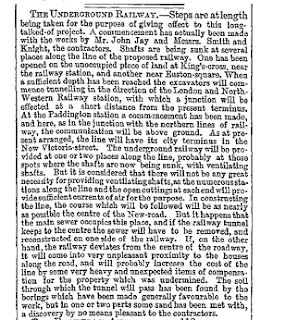 And it was not without its dangers. Remember the Schivelbusch line, familiar from Virilio as well? That every technology co-produces its accident? The train comes with the train accident, but not all railway accidents and dangers have to do with trains. Indeed, there was a lot more to be worried about before trains were running. Does not take much imagination to remember that it might have rained a lot. June 1862 was especially rainy, to an extent that it caused it's dangers to tbe bricklayers in the tunnels. Accidents were feared, and even without casualties, you can imagine the damage a flooding of the tunnels with massive rain water causes. And the smell and the actions needing to be taken: redirecting through sewers, repairing of the damages, starting again.

This is the microhistory of engineering projects, of transport and media: it takes into account the various seemingly grey elements which actually precede any events and dates that are then deemed of significant from a symbolic point of view. Instead of 150 years of London Underground, we have a longer history of the underbelly of the Underground and its relation to the soil, engineering, labour and other material formations. The city lives not only on top of the surface. It has its guts, where we also move, but also other things move, and our life support has to flow; sewers and ventilation, an underground teeming with life, in the soil. Ask the rats.

(Update/postscript: Someone just suggested Neil Gaiman's Neverwhere as the accompanying novel for this line of thought of the underbelly London...And I also just learned that this was first a tv-serial too.).
Posted by Jussi Parikka at 03:21