And now it's turn for Tesla and Nollet. This was from a passage concerning the spectacle of electricity...:

Reading Nollet’s (1749) Recherches sur les causes particulières des phénomènes électriques gives an insight to the enthusiasm concerning the Leyden jar at that time, and Nollet’s continous experiments that had to do with the different material characteristics of bodies – organic and non-organic – to convey, to communicate with each other through the medium of electricity. Later, a similar enthusiasm surrounding Tesla’s performances in his laboratory at Colorado Springs were reported both in wider public as well as specialist publications. The Tesla Coil was a spectacular demonstration of the powers of electricity – and the new worlds of different materialism emerging with that worldview, not without implications to how we approach and think about media technology: 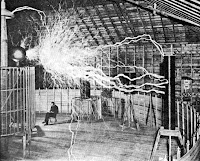 oratory at Colorado Springs equal to the lightning produced by Nature. Although a number of years have elapsed since these experiments were conducted, not a single scientist or engineer has been able to produce such awe-inspiring, electrical performance as did Dr. Tesla. It is true that he is far ahead of his time in many of his inventions, yet he has ably demonstrated that it is possible to imitate some of Nature’s secret forces, but he was performing certain experiments on the problem of radio transmission of electrical energy through space.”