Is media archaeological art only about media of the past resurrected? An increasing amount of answers state "no". 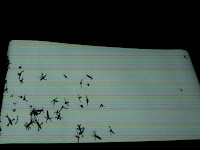 I saw this piece of artificial life art by Laurent Mignonneau and Christa Sommerer as part of the ATACD December 2009 Conference in Barcelona. Life Writer (2006) consists of an old typewriter on which a screen is attached; the screen is filled with these insectoid-arachnoid kind of "animals" that are governed algorithmic rules for movement and reproduction. The letters written are "eaten up" by the animals. As a piece, its amazingly beautiful, dramatic in its Burroughsian insect-typewriter technology. It is also a nice interface of the non-human worlds of algorithmic creatures and the input of the human user; although, already the typewriter can be seen as such a machine of translation of continuity into discreet material which in a Kittlerian fashion prepared us for the post-human. New media of algorithms eats up the input of the old media of typewriters. Everything becomes code, but everything becomes as much eaten up, consumed byt the algorithmic creatures. Its also about translations of the human actions into "fuel" for the algorithmic insects. A metaphorical transposition concerning the biopolitics of software cultures and immaterial labour?