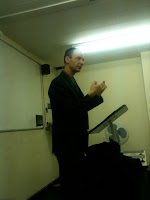 We (as in Anglia Ruskin University, and ArcDigital) had the pleasure of hosting a talk (November 18, 2009) by professor Wolfgang Ernst from Humboldt University Berlin, who is not only continuing the spirit of the almost legendary Sophienstrasse 23 address (where Kittler worked as well) but as much is the representative of the new wave of German media theory that still remains to a large extent to be translated. It is rare to hear these German scholars in Anglo-American contexts so our ArcDigital talk was even more significant in this sense of really tapping into what is new and fresh in international media studies.

Ernst’s talk on media archaeology as a method and a theory really introduced the various radical implications that his brand of doing media archaeology has. I have already before pointed towards the points about “operative diagrammatics” or media history that his take on the past and present media encompasses, and the talk outlined well the positions --- even provocative – where he wants to place media studies. What the audience was left with was a number of positions and claims/challenges to tackle. To me, these indclude:

1) media studies is not only cultural studies, or even cultural technics, but something Ernst wants to brand as cultural engineering. Media studies should be an exact science, not (only?) about semantics and semiotics as he provoked but leaning towards the mathematical conditions of our techno-condition. I.e. media studies curricula should include mathematics. The only way to understand digital media, or technical media more generally, is to understand how it puts mathematics into operation, makes formulas into commands, and how engineering routes and automates so many functions that we mistake as human.

2) Media archaeology is processual, it focuses on the time-critical processes which engineer our lives. This means that media archaeology does not tap only to the past but can dedicate itself to opening up technologies in an artistic vein. Ernst’s examples of media archaeological arts were actually less about artists working with historical material than about hardware hacking, open software and circuit bending. Media archaeology is hence also about microtemporal processes. For an example on such media artistic practices, see the Microresearch lab in .

3) Arche is not only the beginning but in the Derridean sense a command as well. Archaeology as the beginning of our techno-condition is an active command, perhaps execution in the software sense, of orders, procedures and patterns/routines. Ritualistic but not in the human-religious sense, perhaps?

4) Media archaeology does not narrate, it counts. Because machines do not narrate, they count. Counting, algorithmics etc. precede narration.

5) So why not just relegate media archaeology as part of sciences faculties? Because it is still interested in the epistemological conditions in which the commands, executions and operations take place. This seems to point towards the political contexts of media archaeology, but gets rarely articulated in this brand of German media theory. Still, I would argue, it is radically political and taps into the political economic condition of closed systems, opening them up, and teaching that institutionalised conditioning as contingent. Universities then have according to Ernst a special situation, and a responsibility, to open up systems.

6) Media archaeology is a-historical, even unhistorical perhaps. It is not necessarily about contextual information about past media, but creating such situations where you get into contact with media in its radical operability and temporality. Archives in this sense are time-machines; Ernst told us about going to King’s college library to see Turing’s unpublished papers earlier that day, and that situation was branded not by a historian’s interpretative touch but by sharing the mathematical situation in its non-historical presentness. This applies again to machines as well; their functioning operations are the media archaeological moment that is at its core un-historical.

7) Machines are agents of history as well. They record, transmit, and do not always ask for permission from the human being.

8) Media archaeology has some connection with software studies. Ernst pointed the connections to Manovich’s point about the double-nature of software studies between the cultural interface and the computational heart. I would add, both share an appreciation of processuality.

9) Provocation is almost methodological to Ernst and certain brands of German media theory.

Questions that I did not have the chance to ask:

What are the implications of this approach to the cultural heritage, display and archiving of culture in the age of technical machines – or culture of technical machines? I am guessing it has to do with processuality, with such methods of curating and archiving that are able to articulate the lived (machine-lived) temporality of such technological assemblages. How do you curate or archive software is a related question, but it also touches on earlier technical media such as radios and televisions. Furthermore, it has to do with the generalisation of the notion of the archive with new modes of distributed archiving, digital objects, and such.

What is time-criticality? I still cannot get my head around it completely, i.e. the question of how it differs from time-based processes? Video artists etc. are doing a splendid job as articulators of temporality and materiality, but where does the dividing line between time-based and time-criticality lie?

Wouldn’t it be possible to develop more positive and affirmative relations with some emerging cultural analytical approaches that come from e.g. the Anglo-American world? This point I flagged already in my short post on the Zeitkritische medien-book, and I keep on insisting that perhaps we can find the common areas of interest and shared agendas with such approaches as media ecology (á la Fuller), radical empiricism and Whitehead (Massumi) and e.g. feminist studies of science and technology (for example Barad).