Here's the practical media archaeological advise of the day, from 1956 relating to automation and the changing landscape of labor: if you cannot beat them, join them. 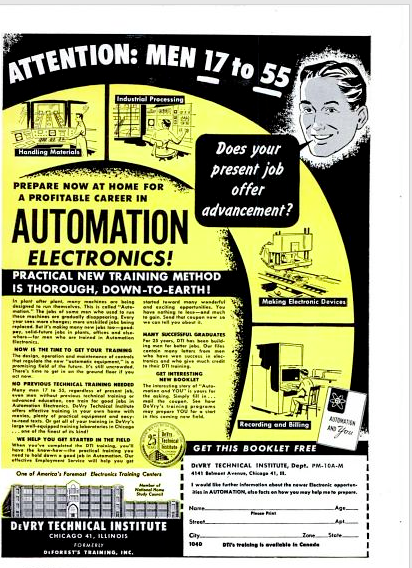 I ran into this earlier interview on the media archaeology and software politics of (computer) viruses again. It's in French but I thought to post a link here as well.
Posted by Jussi Parikka at 10:10 No comments:

This blog was originally used as the work blog of material related to the What is Media Archaeology?-book project. However, I wanted to briefly post the link to the recently published The Anthrobscene-publication: a short-ebook that works as a single or a preview of the forthcoming A Geology of Media.

The Anthrobscene does touch on some media archaeological theory too. It starts from a reading of Zielinski's notion of deep time of the media and the geological concepts that Zielinski uses to outline his methodology. I however offer then an alternative deep time that goes into geological time scales and depths, which are not however removed from a critique of the contemporary notions of (im)materiality of media.
Posted by Jussi Parikka at 05:00 No comments:

On the Temporal Logic in Ernst

There is a very nice review in Postmodern Culture on Wolfgang Ernst's Digital Memory and the Archive. I like how it focuses on Ernst's notion of time - something I believe essential to understand the wider project of the German media theorist. Indeed, in "The Temporal Logic of Digital Media Technologies" Kurt Cavender connects Ernst to Kittler's thought, Matthew Fuller's media ecologies as well as points some of the shortcomings of the arguments (or at least the lack of articulated connections to some other recent theories of software and platform culture).
Posted by Jussi Parikka at 10:34 No comments:

Gender in media archaeology: only a boys' club?

One of the set critiques of media archaeology is that it is a boys' club. That is a correct evaluation in so many ways when one has a look at the topics as well as authors of the circle of writers broadly understood part of  'media archaeology'. I make the same argument for instance in What is Media Archaeology?, but there is also something else that we need to attend to.

There is however a danger that the critique also neglects the multiplicity inherent in the approach. For sure, there are critical points to be made in so many aspects of Kittler's and others' theoretical work, but at the same time it feels unfair to neglect the various female authors and artists at the core of the field. In other words, the critique often turns a blind eye to the women who are actively involved in media archaeology. Let's not write them out too easily.

For instance Zoe Beloff's work is of essential value in this regards as her artistic practice digs out alternative media histories of women in a feminist media archaeological way. One should also check out such artists as Aura Satz and for instance Rosa Menkman too. (And the list could/should be extended!)

Lori Emerson is an active figure in the field through her Media Archaeology Lab. In terms of theorists, how can one neglect the pioneering work of Cornelia Vismann? Or for instance Wendy Chun (whether she identifies herself as media archaeologist or not, her work is such an inspiration always)? One of the key writes is Wanda Strauven with her film theory background. Several people in the field explicitly argue how central Carolyn Marvin's classic When Old Technologies Were New was to their thinking. Machiko Kusahara is bringing exciting topics on the media archaeological agenda and such inspirations like Margaret Morse and Vivian Sobchak - again, professors who do not necessarily identify with media archaeology per se... - are important forerunners. Lisa Gitelman and Lisa Cartwright's work pops up frequently. I myself consider for instance Jennifer Gabrys' work (especially on e-waste) a fantastic contribution to the media archaeology/obsolescence discussions. Similarly Shannon Mattern is someone whose work always deserves a shout out.

But for sure - this is just not enough. We could continue listing fabulous scholars but we also need to attend to the finer micropolitics of how articulations of gender, sexuality and embodiment could make the field increasingly vibrant. I myself am keen to follow the route of feminists like Braidotti in her expanded feminism that takes also ecology and animals as part of the concern: what are the processes of writing out, discursive and in non-discursive practices, which are threatening not only the life understood as Bios, but as well as Zoe: the very fundamental dynamics of life on the planet and beyond. Feminism also extends outside the questions traditionally considered about gender.

The full review came out in the Canadian Journal of Communication and you can find it here.  But the first footnote is good and interesting. I better quote it in full:

"Although it has recently been largely influential in English-speaking scholarship, media archaeology is indebted to the work of European intellectuals, particularly from Germany, the Netherlands, and Northern Europe. Taking into account the context of its development is essential to comprehending its ends and means. In particular, the German-speaking tradition of scholarship brought to this field some important characteristics: its strong focus on theoretical concerns; its antiquarian vocation, manifested in media archaeology through the attention to “dead” or obsolete media and artifacts; and, last but not least, the leading role that archaeology tout court has had in German culture since the nineteenth century."
Posted by Jussi Parikka at 05:32 No comments:

What is Media Archaeology? reviewed in Neural

A new review of What is Media Archaeology in Neural (April 2013):
"To understand the "futuristic" present we live in it's very important to know our past. This seems particularly true when it comes to media culture. In fact it appears that the only feasible kind of time traveling is what is usually defined as "media archaeology", which allows us to re-create and use the same mediations on content that have been used by people in the past, refashioning their specific media context." [...]
Posted by Jussi Parikka at 08:57 No comments: