A Sunday morning at the Gallica Bibliotheque numérique

A bit out of context, and more out of sheer fascination than as part of any systematic message; felt compelled to post these images after stumbling on the virtual pages of Bulletin du Photo-Club de Paris (1894) on Gallica. Always such a fantastic resource for a media archaeologist!

The issue happened to have Albert Londe's article on his work on chronophotography, and participation at the Salpetriere-institute. This is indeed, to refer to Thomas Elsaesser's ideas, one crucial part of the S/M (this time science/medicine) contexts of cinematic technologies, and visual media history where the need for increasingly precise inscription mechanisms of the body was articulated together with hysteria, epilepsy and such maladies of the (female) corpse -- a topic that does not seize to interest me. (Also, btw. the topic of a wonderful recent book by a friend of mine; Mapping the Moving Image: Gesture, Thought and Logos Circa 1900). 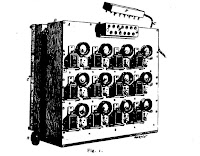 - Image from the Bulletin; a special 12-lens mechanism part of the Salpetriere-institute laboratory for temporal-visual analysis and inscription of such illnesses. 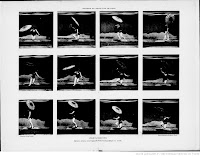 - Another image from the same 1894 issue of the Bulletin, also Albert Londe and his series on chronophotography. A body in movement, a body in balance -- a fascination with the gestures of what the body can do -- and body on film, body inscribed as part of such time based technologies with span the too often assumed gap between entertainment (watching nude woman) and science/medicine (inscribing for analytical purposes women bodies as ill, hysteric bodies).
Posted by Jussi Parikka at 05:31